Thu, 26 December 2013
Chris Horton
A new report by financial services company SBI Royal Securities is taking a bullish view on the investment potential of Phnom Penh condominiums for high net-worth locals and residents or investors from overseas.
In the report, the Japan-based company’s Cambodian subsidiary examines the kingdom’s relatively low barriers to entry and substantial yields when compared with other Asian markets such as Hong Kong, China, India and Malaysia. It also projects that nearly complete development De Castle Royal will be the city’s star performer in terms of return on investment.

When looking at the gross rental yields for these same Asian markets, Cambodia’s investment advantage becomes clear. It currently offers yields of 5.3 per cent, slightly behind Indonesia and the Philippines at 7.1 percent and Thailand and Japan at 6.3 and 5.5 per cent, respectively. China and Hong Kong are offering rent yields of only 2.7 and 3.3 per cent, the report noted.
Such low costs and strong yields have driven increasing interest and investment in Cambodian residential property, especially condominiums. But this is still a relatively new phenomenon. SBI Royal Securities senior associate Leng Vandy said that a few recent but crucial market developments that have bolstered interest in condominiums in Cambodia, primarily Phnom Penh.

“A couple of years ago, there were only a few condominium projects in Phnom Penh,” Leng said.
“They were developed by foreign developers and were unpopular with Cambodians. But the situation has changed remarkably, with new projects being developed by foreign and local developers plus new laws allowing foreigners to have ownership rights over private units in co-owned buildings.”
Despite the attractive yields of condominiums in Phnom Penh, there is not much in the way of supply coming online in the coming year. The only luxury condominium development expected to be completed in 2014 is De Castle Royal, which will be ready for occupants in the second quarter.
The SBI Royal Securities report examined two investment scenarios for De Castle Royal. The first was calculated assuming 100 per cent cash down payment, the second assumed 30 per cent cash down payment with the remaining 70 per cent financed by a commercial bank at an annual interest rate of 10 per cent. Other important factors including rental rate, annual rental price, condominium price increase, occupancy rates and associated costs also figured into the two scenarios.

“De Castle Royal is located in BKK1, the prime residential area for high-net worth Cambodians and expatriates,” Leng said. “Currently the project is the only high-rise condo in BKK1 expected to complete soon. Other existing condominium projects are not located in central Phnom Penh and those currently under construction are years away from completion.”

Leng emphasized Canadia Bank’s financial backing of De Castle Royal as well as Korean developer Nuri D&C’s attention to detail and quality as additional factors for SBI’s high expectations for De Castle Royal. Condominiums in the development are currently selling for between $130,000 and $950,000 depending on size and amenities.
“High-class facilities, luxury high-end furnishings and excellent interior and exterior designs are of course key attractive elements of De Castle Royal,” he said.

All told, Leng said, the potential for De Castle Royal and Phnom Penh’s condominium market in general looks good in the short term especially when compared with the rest of the region, for both external and internal reasons.

“As ASEAN integration in 2015 comes closer, Cambodia is expecting a freer flow of capital goods and people among member states. Demand for condominiums by locals and foreigners is likely to continue to grow in the coming years. In terms of modern developments, the residential property market here is still in its infancy compared with other Asian markets like Thailand and Malaysia. The market’s lack of maturity offers unique opportunities for investors.” 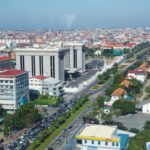