Russian Boulevard land prices rising Thu, 12 December 2013 The west end of Street 110, also known as Russian Boulevard, is attracting increasing interest from investors and retailers because of its vital role connecting Phnom Penh International Airport with the city centre. Local real estate experts estimate that land prices along the thoroughfare have risen between 10 and 20 per cent compared with 2012. VMC Real Estate Cambodia general manager Dith Channa said property along Russian Boulevard has high potential, particularly because of the higher-income local and international traffic channeled through the street. New car showrooms, hotels, supermarkets and large-scale projects such as the $1.1 billion Booyoung Town development have all contributed to the increase in land prices along the street, he said. Russian Boulevard’s most expensive land is on its east end near the central business district centered around Canadia Bank Tower and Vattanac Capital Tower, which is nearing completion [see page 4]. Land prices from Canadia Bank Tower to the 7 Makara Skybridge are currently running from $1,200 to $900 per square metre. From the 7 Makara Skybridge to the intersection with Hanoi Road, prices vary from $900 to $700. Further west between Hanoi Road and Chom Chav, prices are as low as from $600 to $300. Land prices may be showing positive growth, but Confederation de la Russie has traffic problems that need addressing, Dith said. “This road has a lot of potential and is attracting interest from larger companies, but there are some problems at times when VIP visitors take the road and traffic is blocked off,” he said. Khmer Real Estate Company president Kim Heang gave higher estimates than VMC’s Dith for land prices along Russian Boulevard. Kim put prices from Canadia Bank Tower to 7 Makara Skybridge at $2,000 to $1,500. He estimated prices from 7 Makara Skybridge to Hanoi Road at from $1,500 to $1,000 and from Hanoi Road to Chom Chav at from $800 to $500. “Land prices along Russian Boulevard increased from 10 to 15 per cent in 2013,” Kim said. “Big companies use this road to advertise due to many people traveling through, that is also why we see new car companies opening there.” CPL Real Estate Company director and Cambodian Valuers and Estate Agents Association president Cheng Kheng said that the rise in property values along Russian Boulevard was driven by the increase in building projects in the area. A new CPL report lists prices from Canadia Bank tower at between $2,000 and $1,600 per square metre, while 7 Makara Skybridge to Hanoi Road is at $1,000 to $800 and Hanoi Road to Chom Chav at $660 to $450. Ratanak Plaza Supermarket general manager Hang Sopisey said Russian Boulevard was a natural choice for the supermarket due to its easily accessible location. “Being located on Russian Boulevard makes your business highly visible to people who travel to and from the airport – many tourist visitors see us on their way into town,” she said. 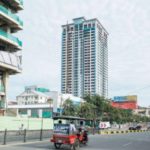 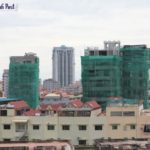